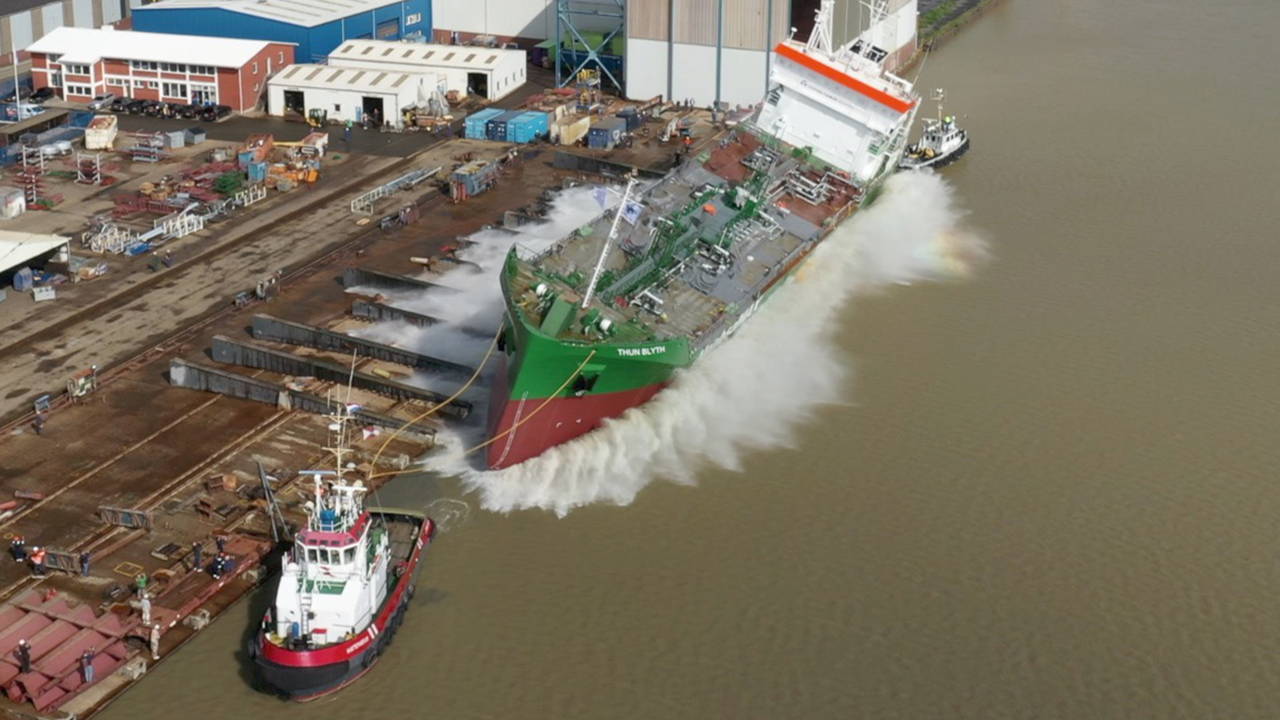 The Geos Group’s new vessel for long-term charter was officially named and launched on 31 August, in a spectacular international online event that honoured all the rituals of a traditional ship christening ceremony.

Here is a short film of the Thun Blyth entering the sea for the first time. It incorporates aerial drone footage of the Ferus Smit shipyard in Leer, Germany, along with pre-recorded messages from all around Europe and an up-close look at the new vessel herself.

The first three messages were filmed on site in Germany. Joakim Lund, CCO of the ship owner Thun Tankers, welcomed the live online audience, and explained why the ship’s NaabsaMAX (not always afloat but safely aground) technology will give Geos Group a competitive advantage.

Mr Lund said: “These ships are built to maximise the intake for our client, when calling into restricted niche ports. The vessel will be able to carry more cargo into these ports than any other vessels have ever done before.”

Ferus Smit, the shipyard’s CEO, said: “Today is an important day for the shipyard and the ship owner. The next generation NaabsaMAX vessel will be launched – such a launching is sideways, which is always very exciting, so I hope you will enjoy this day.”

Karin Orsel, CEO of MF Shipping Group – appointed by Erik Thun Group to manage the vessel on behalf of the Geos Group – said: “A vessel launching like this always gives me the goose-bumps, because it’s such a special and exciting moment. I wish you, and the vessel, the crew, all the best of luck.”

It was indeed building up to be a special and exciting moment. Shipyard staff at the water’s edge could be seen knocking away metal supports and untying the ropes keeping the Thun Blyth on dry land.

We then heard from the ship’s Captain Pieter Dekker, speaking from the Netherlands, who explained some of the technical characteristics of the new vessel. And Johan Kallsson in Sweden, CEO of Erik Thun AB, who said that focusing on sustainability and building long-term partnerships like this one is the perfect way of doing business.

Barry Newton, Managing Director of Geos Group, spoke on the banks of the River Thames in the UK, close to the company’s head office in Henley. “Ferus Smit has done a fantastic job in getting the Thun Blyth ready on time, and we look forward to her joining our fleet later in the year,” he said. “She complements our existing services, and we believe that there will be some great commercial opportunities, as well as helping to service our ongoing shipping requirements.”

The vessel was then christened by her God Mother, Barry’s wife Victoria Newton, who said: “I name this vessel the Thun Blyth. May she, and all who sail in her, stay safe and well.” Victoria then swung the traditional champagne bottle into the air in the UK, and the film showed it smashing into pieces against the ship’s hull in Germany.

The Thun Blyth was then slipped off her berth sideways. It was an awesome sight as this 4,250 DWT vessel entered the water for the first time, with an almighty splash.

The Geos Group would like to thank Thun Tankers, MF Shipping Group and Ferus Smit for making the naming and launch of the Thun Blyth such an inspiring and memorable occasion.